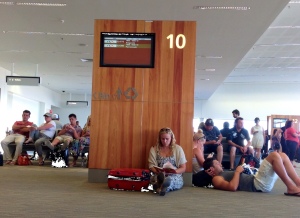 It doesn’t happen often, but everyone knows that the maximum handheld/carry-on luggage allowance on most flights is 7kg. It’s also quite very uncommon that anyone bothers to weigh your hand held luggage (unless of course you look like your taking the Mick!).

Many regular flyers own cabin approved luggage, which is sized accordingly. Occasionally you will shake your head as someone tries to stow a suitcase as carry on.

Today however we found ourselves in just that situation!

On an internal domestic flight of our new home in Australia to Kangaroo Island, we attempted to check our luggage in, but the man behind the desk asked to weigh our carry on. My camera bag weighed 8.6kg and my wife’s bag weighed 3.8kg (That’s a lot of lotions and potions!).

“I’m afraid you can’t take that as carry on sir, you must check the bag in, and there’s no guarantee that your bag will be carried on your flight.”

After discussion it was agreed that I could offload some of the weight from my camera bag to my wife’s handbag. Yes I did ask that as the combined carry on weight was less than 14kg was that good enough? Apparently “rules are rules” so we were sent to the back of the airport with some scales to get this sorted before being allowed to check in.

Once done we were finally allowed to check our luggage and get a boarding card, walk through security to the other side where I am now free to purchase anything from the shops and be allowed to carry this on!

Whilst I appreciate that there are rules that need to be followed, there also needs to be some common sense in the decisions being made. For example, my cabin bag for the camera was made no smaller with some equipment removed and placed in the wife’s bag than it was at the start of this debacle, the combined weight was within the total of 14kg, and once a boarding card is issued, I’m free to purchase more goods that increase the weight that my allowance provides.

Conversely on the return journey, the small airport that checked us in, simply allowed the baggage through, no weighing required!

I guess sometimes being given power and the little things are what helps you get through your working day.