Those of us who are using Keir Frasers amazing GreaseWeazle on macOS, may run into some issues from today 17th September 2020, if your macOS has updated to XCode 12. This article shows my solution to resolving the issue.

Via the Retro community I learned of the GreaseWeazle, and at a fundamental level it works by recording the magnetic fluctuations on the disk surface and therefore doesn't rely on a specific disk interface to decode those signals. As such it makes it perfect for making digital forensic copies of disks in the past. 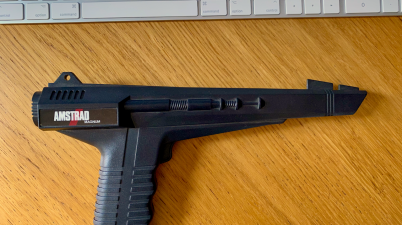 Recently I was asked to provide some information on the Amstrad Magnum Light Gun, and so I fired up the old hardware, loaded up my Assembler and Monitoring Tools and set about reverse engineering this legacy and rare piece of kit.

Back in 1988, I had an idea, it was simple... There were a number of games designed for Joystick only, and back then, I much preferred a keyboard than a joystick. Mainly for the accuracy and the feel of keys rather than waggling a piece of plastic and metal...

I blitzed my way through any protection system I could lay my hands on, we had everything from Speedlock, Appleby, Bespoke, Turbo Loaders, Musical Loaders and the general gaming community wanted games transferred from cheaper cassettes to disks. It didn't take long before I developed a number of automated tools for cracking back in the day.

We all remember our first loves don’t we?  Whether its the kid in the same class at school as you, 80’s taste in music, or your favourite pop-star…  Well, technically […]